Well, tis a new year. A fresh start is upon us and the annual reset for mindsets and habits. We are ready to make changes, to begin again and to live like we have never lived before. It is a rejuvenating time. Even writing the date in January is nice. The first of the first. The second of the first. The fifth of the first. Such a lovely ring to it.

Many people go on the dry for January. Not only are they broke and riddled with a few weeks of hangovers, but they sign up for gym memberships. Going to the gym means buying some tight pants, some protein shakes and getting physical. It also starts off with being as sober, abstemious and parsimonious as possible. It is a fine time to do it. It is a fine time to make a life change.

Normally by the time you get to February some old habits creep back in. Laziness, apathy, boredom and a regressive state of focus push the normal person off course. That’s OK. We are human. It is what normal humans are wont to do. Resolutions, like rules, are made to be broken. It is the thought that counts a lot of the time. The thought and the initial whirl of good intention make for regressing to previous states an acceptable outcome.

How do I start this New Year? I mean I have given up the drink over five years ago. In fact, this year marks the fifth birthday of Sober Paddy. I have had zero alcoholic beverages in that time. I have given up all the drugs. I have given up the cigarettes. I have even given up eating animals. I have married and am living as clean and healthy a life as possible. So where do I go from here? 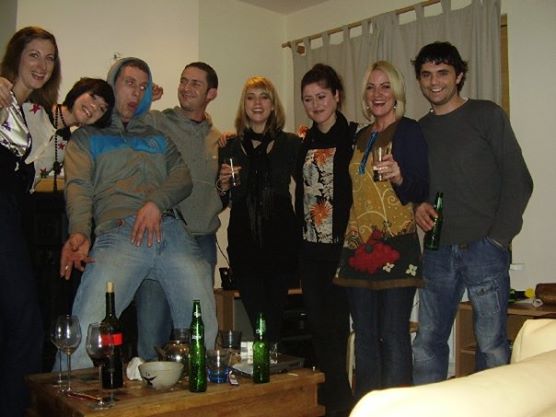 Losing the plot in Spiddal 2008

If ever I need reminders of where I used to be, I always think back to a time just over six years ago. I was in a place down the west of Ireland called Spiddal and it was New Years Eve. I was in a severe state of intoxication and the picture above will leave you in no doubt about that. I was out of control and at the moment that this photo was taken my mind had lead me to believe that everybody else in the picture had constructed convoluted stories to prey on my mind.

I was as paranoid and deeply broken as I have ever been. The following morning, on New Year’s Day, I drove of home to Dublin on my own…deranged beyond belief. It was a watershed moment. Never before had my intoxication led to such extreme delusion and fear around my friends whom I loved the most. That was six years ago and if I ever need reminding to stay strong and enjoy the freedom of sobriety, then this is it.

Happy New Year to you all…I hope it will be a great one.