The streets of Santa Marta

It is a fact of life here that some days when I leave the hostel to go anywhere, I pass kids on the streets who are smoking crack or ice. A local tells me that it is something a little different el ninos take, but just as potent and addictive. These kids are around ten years old – smokin’ the pipe. Then they scurry wide eyed and manic, hustling and begging, snatching and selling around the dark, dodgy streets. There is a red light district here too. We live right beside it. Some of them have been earmarked for it. Some have already been there.

I almost had an argument with my wife about it. Almost. Sure I was out dabbling in narcotics as a teenager and I turned out ok, I thought to myself. There’s hope for these kids yet. I checked myself though. A few 16 year old mates sharing a few spliffs and bowls in a shed, is a far cry from pre-teen crack pipe, in full frontal of all and sundry.

It is a bit sickening.

You have got to wonder how these kids can even make it to adulthood. Child prostitution is rife I am told. I see young looking hookers on the streets but don’t stare too long. The drugs are rampant in the slums. Cocaine cares not for your colour, age or wealth status. It treats us all the same.

I have been giving a few hours of my time in the slums. I am volunteering and teaching young kids how to sit still for a few minutes while they mimic what I say. They are from the poorest of the poor areas. Some taxis won’t go here out of basic and simple fear. A group of us go in with open hearts and no locals bat any lids.

These kids are bundles of beautiful energy. They are smart and playful but by the age of 10 and 11 have nothing to hope for. Most parents don’t worry about their schooling. There is no public transport to this slum and no schools nearby. They call it El Oasis. I wonder who came up with that? 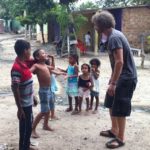 I have a blast with them. And I get to thinking that there is some hope. One man has given up most of his free time and life to help them and school them. He uses volunteers to teach and positively influence. But as we left the school today we passed a group of men sitting drinking hard liquer on the streets. They called over one of the youngest kids and made him drink some. The kid gasped and the men laughed and sort of slapped him away.

What can you do in one of the most dangerous barrios in this city?

Walk over all indignant?

“How dare you do that to this young boy?”

It doesn’t work like that in my planet. I just looked over and shook my head and motioned the kid to follow. The men all sort of stared over. It is not the kind of place you can easily be Alpha male….what with the underbelly of drugs and machetes and violence rife.

There is a smell in the air. It is not just the open sewerage that seeps around. It is the scent of predators in the fold. It is the sight of a pregnant 13 year old who comes into school, stumbles nervously through a class and then dissapears again for a few days. It is the smell of innocence being carved away on streets by menacing drunken bums. It is the sight of a 1 year old baby wandering naked through muddy paths with no one who cares. 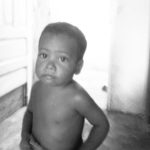 The kids tell me in Spanish that I have big muscles becasue I drink beer. Don’t you know who I am I ask them? I am El Sober Paddio.

But they just think I’m joking.

But there is hope. There are people who give up their lives for these kids. There are people who take time to volunteer and help and donate and build. It is the first time in my life where I have thought deeply about how lucky I am to have been born where and when I was – A white male from a strong European country in the 20th century.

These people have nothing so the great thing is that even the smallest amount makes a huge difference.

Funny that on the coast some twenty miles south I saw 15 oil tankards pull into an off shore rig and fill up before onward sailing. It was astounding to see such behemoths of modern civilisation in full flow. Crude oil is the biggest export in Colombia. There is an abundance of wealth here. It is a massive country full of industry and natural wealth which should filter down to the masses.

But that just isn’t the case.

Like the rest of planet mutant capitalism, the cream is kept for the top few percent and the general population are left to fend. And here they don’t care too much for the slums. This is not middle class or even lower class. This is bottom of the crude oil barrel here.

While I am no tree hugging hippy, I am making it clear that I am one of the lucky ones and others need help.

Now is such a time of change in the world.

Is it time you tapped into this new energy too?

13 thoughts on “The streets of Santa Marta”